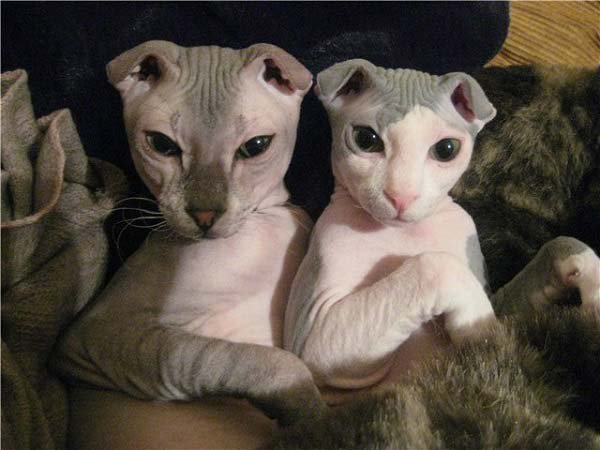 As you may have seen, the ongoing conflict in Ukraine is affecting not just its people, but also its animals, which has been just heartbreaking to see. Our feline pals are just as popular in Ukraine, as they are here. However, while Ukrainians have all sorts of furry friends, only one breed originated in the region: the Levkoy. A veterinarian takes a look at this unusual kitty below.

The Ukrainian Levkoy is a fairly new breed. A breeder named Elena Biriukova developed the breed between 2000 and 2011 by crossing hairless Donskoys with Scottish Folds. The Levoky isn’t currently recognized by any of the international breeders associations, such as the CFA or TICA. However, they were officially accepted by a regional one, the ICFA RUI, in 2005.

Levkoys have a very distinctive look. The most striking thing about them is the fact that they are hairless. Their heads are unusually quite angular, and their ears are sometimes rounded, like the Scottish Fold’s. They sometimes have curly whiskers and/or long tails with pointy ends. It’s also worth mentioning that they can get pretty big!

Levkoys are still quite new, so we don’t have a lot of data regarding their long-term health yet. However, they may be susceptible to the same conditions their ancestors often get. Donskoys often get dental issues and dysplasia, while the Scottish Folds are prone to developing kidney issues or cardiomyopathy. As with any other pet, proper veterinary care is crucial.

Levkoys are very cuddly and lovable, and they get extremely attached to their humans. In fact, they are so sociable and friendly that they can get depressed and anxious if left alone for as little as eight hours. If Fluffy is going to be home alone a lot, she really should have a buddy, so she doesn’t get lonely. Levkoys are also playful, though rarely aggressive. These cute kitties need plenty of toys and playtime!

Levkoys have the same needs as other cats, for the most part. However, because they don’t have fur, they are prone to getting chilly. They often need to wear sweaters when it’s cold, and will appreciate a heated or thermal bed. They can get sunburns, so be sure to use a safe sunscreen on your kitty if she’s allowed out. Ask your vet for care tips.

Many wonderful organizations around the world have been stepping up to help the people of Ukraine and their pets over the past few weeks. One that is specifically focused on helping animals is IFAW. To learn more about the organization and/or make a donation, visit their site here. Every little bit helps!

Do you have questions about your cat’s health or care? Contact us today!